I’m crouched in the shallow snow, my weight on the heels of my boots. My eyes scan the horizon of the ridge-top cornfield, looking for a dark line of motion. Just minutes earlier I had startled a flock of about 30 turkeys, the black birds scattering into the woods like spilled marbles rolling under a couch. No time wasted in the frenzy, just fluid, intuitive reaction.

I grew up in a family of hunters and associated meat with death from a young age. Deer carcasses hung in our garage every November. My dad put my little hands to work plucking grouse, pheasant, geese, turkeys and ducks. I flung clay pigeons as high as I could into the gray sky above windblown rural Wisconsin farm fields, waiting for the exhilarating clap of shotgun fire to rattle through my small body. It wasn’t until I was an adult that I made an effort to participate in my own meat sourcing.

Eating meat has always been a complicated matter for me and I have wracked my brain trying to come up with the best way to do it. Humans have created an animal consumption model that strives to meet a demand for cheap meat, and now there isn’t a link in the chain that doesn’t exploit animals, humans and the environment. The seven billion livestock in this country consume five times as much grain as is directly consumed by the entire U.S. population — it takes two pounds of field corn to produce a single pound of beef. Concentrated animal feed operations (CAFOs) are the primary outlet for the millions of acres of mono-cropped corn and soybean deserts that have replaced our diversified family farms and natural grasslands.

As a teen, I considered what would happen if we all stopped eating meat: the near extinction of domesticated livestock animals – thousands of species that have evolved alongside humans for millennia. That didn’t seem like the answer.

I was 26 and pregnant when my husband, Jesse, and I bought 125 chicks through the mail. We kept the babies warm in the loft of our family’s dairy barn until they were strong enough to go out to pasture. We weren’t very good chicken farmers. We lost about 30 birds to our Siberian husky and made the mistake of not grinding our grain before feeding it to the chickens, resulting in low body weight and gamey flavor.

The following spring, we brought home 11 Red Wattle piglets from a neighboring farm and introduced them to their cozy home, a pasture with a shelter and a large oak tree. Our farm’s large CSA operation produced a steady supply of vegetables for the hogs to grow fat on and Jesse soaked wheat and barley into a fermented porridge for the herd.

Corralling the pigs into the trailer that first year was one of the hardest things I had experienced as a meat-eating human. I had just spent six months gaining the trust of those curious creatures. I felt like a wicked witch luring them into a trap with melon and apples, only to slam the trailer door behind them. I looked into their eager eyes through the rusty open windows of the rickety old trailer and I felt real pain inside. It was then that I knew what we were missing from our omnivore quotient: connection. The closer we get to our animals, the more we respect them. The next year we extended our animal production to include grass-fed steers. Our connection to our food grew even deeper.

After years of farming, I had realized that there is no such thing as a farm free of animal death. For every acre of forest that is cleared, countless animals lose their lives or suffer habitat loss. In running tractors or implements across the earth, animals die. Farmers trap and kill pests. There is no food production without death, so why not meet the animal in the wild?

When I was barely tall enough to reach the kitchen counter, I would steal bits of raw venison off the cutting board. My dad started saving organ meat for me and grilling it up each time we had wild game for dinner. “This one’s for little Jonny,” he would say, hold up a duck heart, a goose liver, deer kidneys. My parents showed me how to suck the marrow out of the bone and eat the animal nose to tail (out of respect, I would come to learn). Twenty years later, when Jesse started carrying in deer from the valley, my childhood hunger for wild game surfaced. This time I wanted to be out in the field, in the cold, in the dark, in the rain, experiencing the hunt for myself. I decided that if I wanted to be a courageous meat eater, I needed to go to the source and harvest animals in their most natural state. I got my hunter’s safety certificate at 28, and turned to my dad to mentor me in the hunt.

Back on that ridge top, settled back on my heels, I reminded myself how hard it is to bag a fall turkey. “Less than five percent in this part of the state,” Jesse had said. I’d been stalking this particular flock for days. Then, from behind me, I heard a soft crunching and crackling. Out of the corner of my eye I could see the glossy black birds coming up on my right, 50 yards back. “OH MY GOD,” I mouthed silently as I filled my lungs with cold, dry air. I slipped out of my glove, turned off my safety, blood rushing in my ears.

As the sound of the prehistoric birds moved closer, my mind began spinning. Turkeys have a keen sense of hearing. They move as one, like a billowing, undulating cloud. Their feathers are like a body of armor that can deflect the spray of my shotgun pellets. The only targets are the head or neck and those are tiny. “They can’t see me if I don’t move, just like the T-Rex,” I told myself. Once the turkeys saw me, they would tuck their heads low to the ground, running start to take flight. I counted down from five, like a child jumping into water. I swung around to face the turkeys, I chose my target, shut my left eye and found my mark…and missed. I laughed out loud, half in frustration, half as if to cheer for that mother bird, flying her kids away to the safety of another place, far away from the villain.

To take a life feels like the ultimate betrayal of humanity, but as we casually put packaged meats into our grocery cart, we are willing participants. The meat industry does everything it can to separate us from the horror of feedlots, chicken factories, and intensive swine operations. Hunting for our meat, coming face to face with the suffering of our food choices, offers an opportunity to confront our aversion to death. We should respect hunters as the ones who are willing to invest time in knowing their food and carry the burden of taking a life.

The hunting and fishing industry is heavily criticized by animal-rights groups and scoffed at by many violence-adverse meat-eating folks. But what not everyone realizes is that Fish and Wildlife Service has continually provided funding for public land protection through an 11-percent tax on hunting licenses, gear and supplies under the Federal Aid in Wildlife Restoration Act of 1937. Hunting is both an act of conservation and a thoughtful way to source food. By choosing to eat an animal, we participate in a system that can either improve or destroy the environment. As for the life of that animal, if you feel nothing, it’s time to take a closer look. The more you know about your meat source, the more ethical choices you will make. You may even be driven to search for wild food.

XX Jonnah Perkins has been farming alongside her family for over a decade. She is an ultrarunner, hunter and food activist, tirelessly plotting to improve our food system while exploring on foot. She lives in southwest Wisconsin with her husband and two young children. You can find them traveling around the country, living out of their car whenever they get a break from the farm. 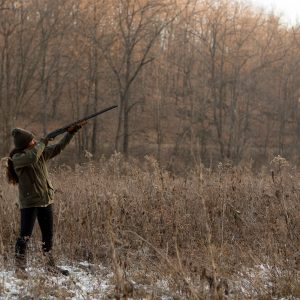 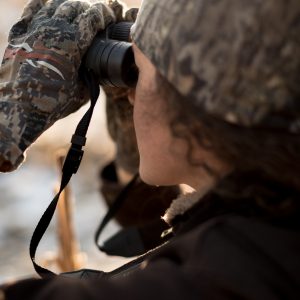 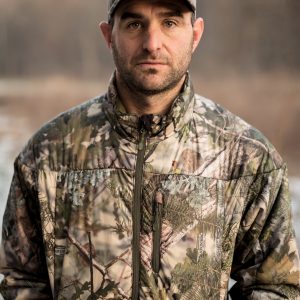 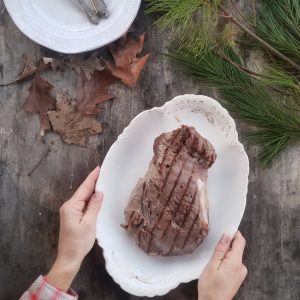 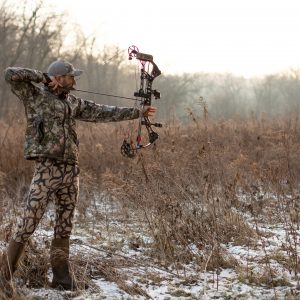