In the most geologically diverse areas of Oregon, at the base of the Blue Mountains, lies the Confederated Tribes of the Umatilla Indian Reservation. Prior to European contact, the members of the Cayuse, Umatilla and Walla Walla tribes lived in the Columbia River region for more than 10,000 years, moving cyclically from the lowlands along the Columbia River to the highlands of the Blue Mountains to fish, hunt and gather food.

This beautiful landscape of rolling hills and wide-open plains of the Columbia Plateau is home to 39-year-old Acosia Red Elk, world champion jingle dancer and creator of powwow yoga. Acosia is a member of the Umatilla Tribe and descendent from the Chief Joseph band of the Nez Perce. She also identifies with Scottish, Irish, Norwegian Dutch, Seneca and Mi’kmaq ancestry.

When Acosia Red Elk was six years old, she stood next to a fire to warm her legs. In a matter of seconds, the trajectory of her and her family’s lives changed forever, as flames crept up the back of Acosia’s homemade velvet gown. Before she knew what was happening, her sister had pushed her to the ground and was smothering the flames. The burns were severe, and Acosia, which means young swan rising and “from the fire,” was airlifted from Pendleton to Portland, where she and her mother spent a month at a hospital burn unit.

Back home, Acosia’s older sister took care of her father and two brothers. The event put a major strain on her family. It sent her father into a downward spiral of alcoholism, eventually leading to his untimely death.

Acosia struggled with insecurities about her scars, the guilt of catching fire and the pain her family endured in the aftermath.

“I was a little ashamed,” she says. “I was pissed off at the world because of my accident and my dad died and I was living in an environment that was unhealthy.”

When Acosia was 11 years old, her mother encouraged her to participate in a fire-walking workshop to overcome her fear of fire and past trauma. Acosia learned how to use the power of thought to control her body through meditation. She learned to envision her strength to conquer her fears. Walking across the hot coals was an empowering moment for Acosia.

As a teenager, she struggled with drugs and alcohol but remained close to her mother, who she says was a constant source of support and empowerment. When she was 16 years old, Acosia began attending longhouse powwows. Longhouses, a traditional Native American dwelling, are common places to hold modern day powwows, where various tribes come together for celebrations of singing, dancing and prayer. Inspired by the dancers’ confidence, Acosia envisioned herself taking up jingle dance and becoming a world champion jingle dancer. A few years later, she fell in love with a champion dancer named Paris. Paris coached Acosia, and in 1998, in her first jingle dance competition, she took home the top prize.

Acosia and Paris took off together for the next 10 years, attending powwows and entering jingle dance competitions 50 weekends a year. In 2004, Acosia was invited to be the lead female dancer at the Gathering of Nations, the largest powwow in the world. She won first place and wound up winning seven years in a row, an accomplishment no one had yet achieved.

Dancing in unison with the other jingle dancers and being a part of the powwow circuit gave Acosia an identity she’d lacked in her youth. Jingle dancing ignited a new feeling within her.

“The moment I took my first step on the dance floor, I was so scared, but then, boom—I remember thinking, ‘This is where I’m supposed to be,’” Acosia says. “I’d been beating myself up about my legs. I hate my legs; I hate my scars. Yet these are the ones that are carrying me out here.”

In 2014, Acosia discovered Buti yoga. The only exercise she knew was jingle dancing, and she’d never been to a group workout before. The experience was so powerful it brought Acosia to tears. Being conscious of her breathing and movement, she felt as though she was releasing trauma from ancient times, emotions passed down from her ancestors.

She wanted to share the empowerment she felt with others and got a teaching certificate. Through yoga, Acosia believes she can save her people.

“Every time we bear children, we pass along our trauma,” she says. “If we don’t start taking care of ourselves now, the pattern will continue. We need to start changing these patterns. We need to start letting go of all the things that no longer serve us.”

Acosia created powwow yoga to encourage people to practice yoga, connect with their bodies and have fun. Taking what she knows from dance and yoga, powwow yoga is a fusion of both. The discipline blends the high energy, pounding feet moves and high kicks of jingle dancing with the fluidity of yoga. It delivers strength, cardio, stretching and meditation in one workout and teaches people to build a strong foundation.

She teaches her classes at Wellness Wave, a yoga, health and fitness studio on the Confederated Tribes of the Umatilla Indian Reservation. Acosia takes small steps every day to share powwow yoga and health awareness in her community.

“As native people, we believe in indigenizing fitness, getting out there and doing all of our old activities we used to do, like hunting, hiking and fishing,” Acosia says. “It’s about getting in touch with your physical culture.” 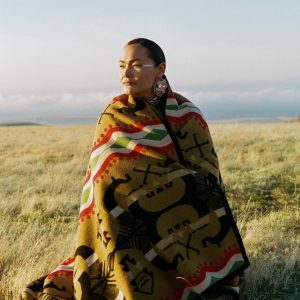 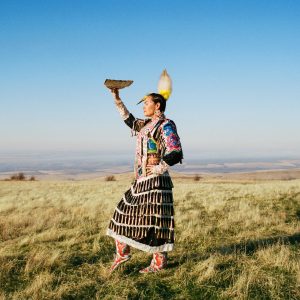 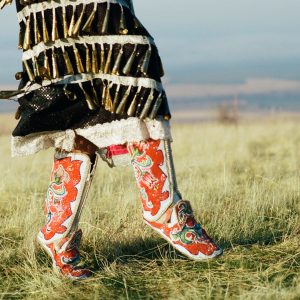 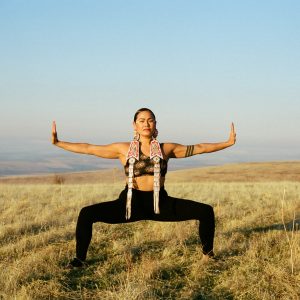 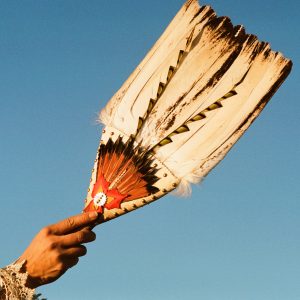 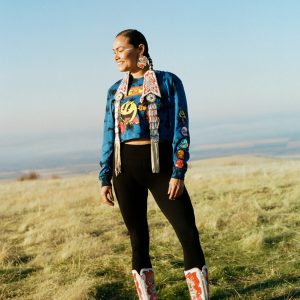 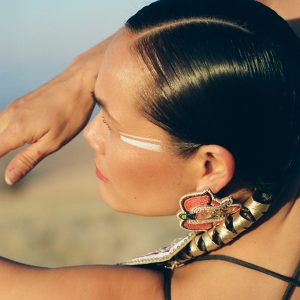 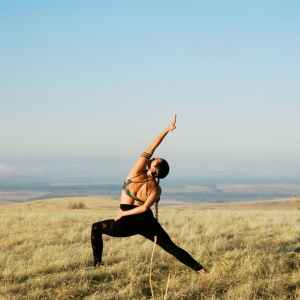