Artist and writer William Morris once said, “Have nothing in your house that you do not know to be useful, or believe to be beautiful.” I whispered these words to myself one warm May morning as I hauled boxes of my belongings into my uncle’s basement. He had generously offered to store 95% of what I owned.

Although I am not a pack rat, I did value many of my more sentimental possessions, such as boxes of letters and photographs, keepsakes and treasures from my travels, as well as my artwork and supplies. I pared down what I could, but still ended up with a couple carloads of stuff. Then Kyle and I set out on our one-way road trip with the vague idea of moving to my hometown in Northern California. Beyond that, we had no concrete plans. It was a liberating and unnerving sensation.

Hitting the road was invigorating. The frustration and anxiety I’d felt over the preceding weeks of delay seemed to dissolve with every mile traveled. We felt free with few plans and few possessions. Our wanderings were guided by a collaborative project called The Free Dwellers. Our plan was to interview individuals and families living alternative, ecologically-minded lifestyles. We were enchanted with the radical notion of “living simply,” purging material possessions and reconnecting with nature.

Before heading west, we did a 10-day mini trip through Vermont, New Hampshire and Maine in order to evaluate our supplies. As we learned to operate in our new mini home, we were forced to ask, “What could we do without? What could serve multiple uses?”

The first thing that needed to go was the camper’s original shaggy, red carpeting. It was old and worn, and we knew it’d be a nightmare to keep clean. After tearing it out, we installed birch plywood flooring, which was a breeze to sweep. We quickly ditched a small trunk we initially thought would both provide storage and serve as a table. Instead, we found ourselves maneuvering around it more than using it. After that, we used stumps as table tops. We switched from full-sized pots and pans to our compact titanium cook set previously used only for backpacking. An 18-pocket shoe caddy on the inside of the bathroom door provided organization for odds and ends, such as spare batteries, trash bags and cleaning supplies. Kyle and I each had a plastic trunk to hold our clothes, which sat atop the camper benches while driving. We made do with small amounts of everything: two forks, one set of sheets and a few pairs of underwear. Our four months on the road were a concentrated lesson in adaptability, an important skill for all realms of life. I explored the edges of my capabilities and learned the difference between my needs and my desires.

On a chilly March morning during a recent trip back east, I visited my basement belongings. It was an overwhelming reunion. I was surprised by the rush of emotions and memories I felt in the presence of stuff I’d lived without for nearly a year. Then I remembered the words of William Morris: useful or beautiful. I hung onto my rain boots and caribou antler, but many of the items in the boxes didn’t fall into either category. Living in a small space on the road highlighted the value of experiences over things. I realized I’d rather fill my life with beneficial lessons and poignant memories.

Madeleine is a dreamer, doer, mover and maker. She loves writing, making art, and being in nature. After five years in New York City, she’s returned to her rural roots in northern California, plotting her next adventure. 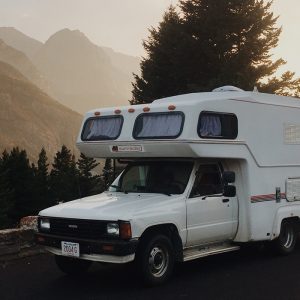 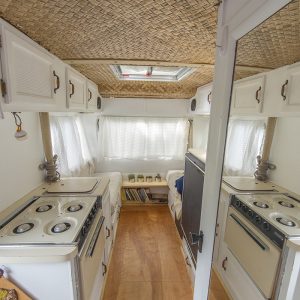 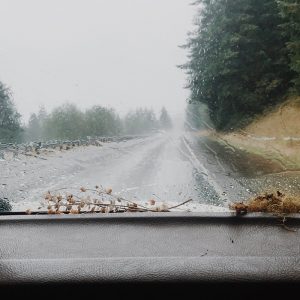